To share your memory on the wall of Amos Roe, sign in using one of the following options:

After graduating from Dixon High School (Ill.), he attended Wesleyan University (Conn.) and Trinity
College (Conn.). He then lived a year in New Zealand before settling in Sauk County, Wis.
Amos was a proficient musician, mostly self-educated. Professionally, he taught piano and guitar for
over 35 years. Although music was his forte, he imparted knowledge of all sorts to those who came to
him for lessons; he conversed on every topic imaginable. Amos took an interest in his students’ lives
beyond their musical development. He had an exceptional understanding of children, caring about their
well-being, their ambitions, and their personal growth. This fervent and holistic dedication made him an
unforgettable instructor. Amos was also a mentor to his many friends. Full of advice, encouragement,
and generosity, he frequently helped those in need.

As a local activist, Amos’ passions were wide-ranging. From environmental to anti-war efforts to
educational causes—he became directly involved to effect the changes he envisioned. He was broadly
active in politics in Sauk County, including as a member of Sauk Prairie Peace Council. Perhaps most
notably, he organized a movement to stop the expansion of U.S. Highway 12 in the Baraboo Bluffs. In
2019, he ran for school board in Madison, Wis. And between such endeavors, he took every opportunity
to write letters to the editor, many of enduring renown.

Amos’ life became richer in 2010 when he married Cherity Foat, and became a father to Ethan Yepiz-
Foat, then age seven. He deeply loved and cherished his family. Recently, he recounted to a friend how
blessed he was to have spent the first years of marriage and fatherhood with them at his farm deep in
the woods of the Baraboo Bluffs.

Amos was a man of great conviction, who lived by the principles he affirmed. He shunned the
conventional and trod his own path, enriching others with his original perspectives and nonconformist
methods. His conversation was colorful, rich with stories and laughter—his influence, indelible.

In lieu of flowers, memorial gifts may be made in his name to The Nature Conservancy of Wisconsin or
Primates Inc. of Westfield, WI.

Dear friends and family: An outdoor memorial service will be held in the late Spring of 2021 so that we can come together to honor Amos. Please let Cherity know at cherityfoat@yahoo.com if you would like further information on services once dates are available.
Read Less

To send flowers to the family or plant a tree in memory of Amos Burritt Roe, please visit our Heartfelt Sympathies Store.

Receive notifications about information and event scheduling for Amos

There are no events scheduled. You can still show your support by sending flowers directly to the family, or planting a memorial tree in memory of Amos Burritt Roe.
Visit the Heartfelt Sympathies Store

We encourage you to share your most beloved memories of Amos here, so that the family and other loved ones can always see it. You can upload cherished photographs, or share your favorite stories, and can even comment on those shared by others.

The day that Amos called in response to an ad that we had posted to find a piano teacher for our grandson Henry as an important day at our house. When i heard that deep baritone voice and his response to our add, I knew we had a winner.We took Henry to Amos's. house, and there Henry began taking piano lessons from a man that we always regarded as someone who was very special. We not only found a good piano teacher, but someone who became a great friend of our family. likewise we became good friends of his family, Charity and Ethan. We loved watching Amos perform with his funky tunes and hat at one his performances...He was a great entertainer.

Amos was not only a piano teacher,but we found him to be a Renaissance Man. He knew much about the world we live in. His brother John lives in Royalton Vermont, and works in the field of natural resources. That was the town where i grew up and attended high school. His brother John works with natural resources in that area of Royalton. I attended high school in that town. We have had much to discuss relative to the state of Vermont.from In fact, Amos's. student Kyle Coolidge, is a Grandsons of Vermont's only U S President Calvin Coolidge. Kyle has developed into an outstanding piano player, as did members of the Coolidge family. He had many other students from the Baraboo area as well.

Amos loved his farm land in the Baraboo area and was extremely interested in the. preservation of all natural resources and gardening.The land around his home in Madison has. been turned into one great garden area, where he has produced all kinds of vegetables and berries All of this production ends up on the dinner table at his home elegantly prepared by his dear wife Charity.

One of my greatest contact with Amos is the production of shiitake mushrooms. We have worked with our club of mushroom growers, picking and planting those wonderful fungii for several years. Amos with his wit and humor will be sorely missed when we form our "shiitake mushroom line" when we do our yearly planting of those wonderful fungi on our hardwood logs. We both have developed our "little mushroom farms at. our home locations and enjoy comparing notes as our mushrooms grow.

It has been a pleasure to have had Amos, Charity and Ehan as our friends over the past few year..Amos will be sadly missed, but we plan to always be there for Charity and Ehan. I am sure that every time I go out to tend my mushroom garden in our yard, I know that when i go out to tend mushrooms in my yard, that great memories of Amos will be there to remind me of our wonderful friendship. Good luck as you cross over to the next world, and it will not be too long before we'll be together again and who knows, just maybe there will be another great garden up there growing mushrooms along the side...cheers and the best to you Amos....JJO 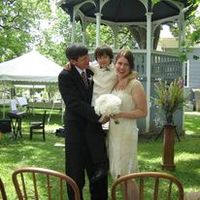 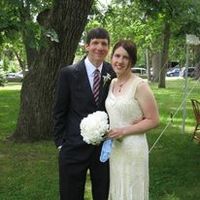 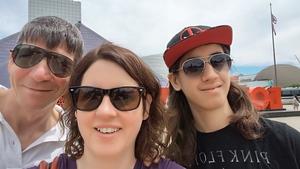