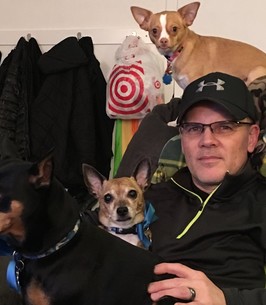 Dwayne was a 1988 graduate of Monona Grove High School. He then proudly served in the US Army between 1988 and 1996, then Army Reserves from 1996 through 2005. On February 20, 2000 he married his best friend Michelle Nelson in the Capitol Rotunda in Madison Wi. Dwayne was employed by Perkins Family Restaurant from 2005 until time of his death. Dwayne enjoyed spending time with Michelle, Michael, their dogs and other family and friends. He very much enjoyed the sports involvement with his step son Michael during his school age years. Past few years he enjoyed motorcycle riding with Michelle, Michael and Mara. He was always that special uncle who was a kid at heart that was always playing with all of the nieces and nephews.

In addition to his wife Michelle of 22 years, survivors include his step-son Michael (Mara) Mack, his sister Stacy (Nicholas) Adair, his parents, his in-laws Debbie & Gene Mahlum & Ken Nelson, along with other in-laws and family and friends.

In honor of Dwayne’s wishes there will be no services.

The family thanks the many family, friends and co-workers of both Michelle and Dwayne for their love and support and donations to help them get through Dwayne’s journey. We also would like to thank Agrace Staff for their tremendous help, care and support, with special thanks to Megan and Melissa. In lieu of flowers we request memorials in Dwayne’s name be made to:
Agrace Foundation 5395 E Cheryl Pkwy Madison Wi 53711.