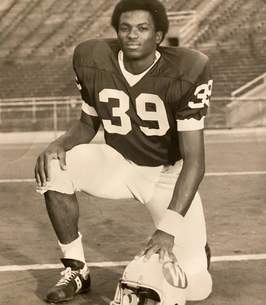 Jeffery Frazier Mack, Sr. was born on Friday, October 30th, 1953, and made his transition on May 8th, 2022. As a young man, Jeff loved playing chess, reading comic books, hanging out with his friends and sports. A two-sport athlete excelling in both football and basketball at Farragut High School, Jeff was awarded the illustrious title of All-American. Jeff was the star running back and point guard for the powerhouse Farragut Admirals, who competed for the Illinois State Title every year. He would tell his children of the times opposing teams would chant his name during fall camps in preparation to stop him, “but it never worked.” (Only with close family would he tell his ‘stories of lore’, as he was quite humble in public arenas.)

While Jeff was building his on-field prowess, he caught the eye of the love of his life, Kirbie Lyn Green, then cheerleader for the “rival” Austin Tigers. They met on his birthday and quickly figured out their futures were destined to become one and never looked back.

During Jeff’s Senior year in high school, he intensified his focus on football, and later went on to excel at the highest level, earning the prestigious Knute Rockne Trophy for Most Outstanding Football Player in the State of Illinois. With his football talents and strong academic focus, Jeff was offered a full scholarship to many colleges, though selected the University of Wisconsin-Madison in 1971.

At UW Madison, Jeff’s college career was exceptional. He was a Flanker who did everything he could to help the team, ending his career with over 1,800 yards of offense and 13 touchdowns in 3 years. He also held the record for average yards per catch up until the early 2000s. But one play has all Badger Fans still cheering and remembering his legacy: he caught the pass of 77 yards to score the winning touchdown against 4th ranked Nebraska in 1974. To this day, it remains one of the top plays ever in Wisconsin Football history.

Despite his amazing athletic talent, Jeff knew the most important part of growing up was an education, or as he liked to say “hittin’ the books” as he would tell his children this seemingly every day if you asked them! His friends and teammates would always laugh about "seeing Jeff with his briefcase" walking to class! He graduated with a B.A. in African American studies and knew his education would be the cornerstone to a better life ahead. After college and a brief stint with the Kansas City Chiefs, Jeff began his working career at Madison Metro. There, he started as a bus driver, but quickly rose to supervisor. He spent 33 years at Metro, gaining numerous friends along the way.

Kirbie and Jeff had three children, Maaina, Jeff Jr. and Anisha. Jeff’s focus quickly became raising his children the right way. He was integral to all of their academic and athletic successes. He attended all of Maaina's track meets and coached Jeff Jr. and Anisha in basketball and Jeff Jr. in football. He was the consummate coach and his reach did not end with his son and daughters. Every kid on the Southside knew Jeff as “Coach Mack'' and revered him as a leader and father figure. Many of the young men in Madison who knew Coach Mack will attribute their success to the tutelage and leadership he provided.

The coaching and tutoring did not stop for Jeff. Along came his grandchildren, who he loved and smothered with hugs and kisses every time he could see them. Jeff adored them dearly and he made sure they knew it! His love was only matched by his focus on teaching a lesson every time they visited. From looking both ways when crossing the street, then reading, science, math to basketball and self-defense; the grandchildren were always learning when Grandpa was around. His teachings, stories and hugs will be missed.

In lieu of flowers, please send a donation to: