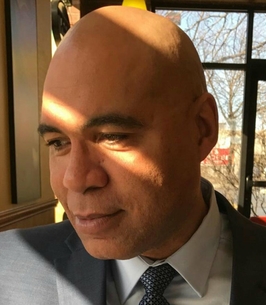 Mark Donnell Larsen, age 60, passed after a valiantly fought battle with multiple myeloma on August 4, 2022. He graduated from high school in Madison and later continued into the trades with his passion being woodworking and carpentry. Mark fulfilled his lifelong dream of becoming a father when his oldest son Liam Larsen was born and later continued to build his family when his youngest son Tristin Rowland arrived.

Mark was an enthusiastic carpenter, passionate paralegal, and most importantly a devoted father and family man. He is survived by his sons Liam Larsen and Tristin Rowland, his loving partner, Jodi Cusick and her daughter Lexi Acosta, and his foster parents Joe and Thelma Fleming. He is also survived by his given and chosen family consisting of several siblings, nieces, nephews, cousins and many friends. He was preceded in death by his maternal grandparents Harriet and James “Harlan” Larsen; his paternal grandparents Noah and Elnora Henderson; his mother Katie Larsen and his father D.O. Henderson.

Mark Larsen touched the hearts of all those he met; he could make new friends in a matter of minutes and had a way of making everyone feel comfortable and important. He loved fiercely and was well-known for his reliability and drive to help his friends and family. Just as he was loved, Mark will be missed deeply and his memory will continue to live on through all those whose lives he impacted and changed.