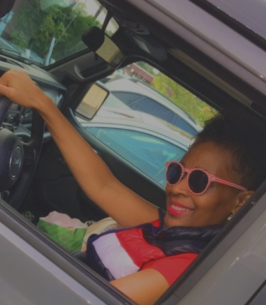 Tamra Marie Verrett Stoll
Tamra was born August 18, 1956, in Oxnard, California, to Eunice Dennison Verrett and the late Leon S. Verrett II. Tamra liked the spelling of her name--that it didn't have an extra A like Tamara. She felt ripped off that her parents didn't give her a middle name. So, since everyone said she resembled Aunt Mary, while still in elementary school and requiring no parental permission, she became Tamra Marie. Everybody called her Tammy for years, but she never liked that nickname. "I hate it when people sing 'Tammy, Tammy...Tammy's in love' ", she'd say. You know, the title song from that Debbie Reynolds movie? So, she will be referred to as Tam for the rest of this life sketch. Tam was Mama's middle child and had all of the depth and creativity that goes with that designation. She started her education at Los Angeles Union SDA School, now called Los Angeles Adventist Academy (LAAA). Tam continued on to Lynwood Adventist Academy, and graduated with honors in 1974. She studied at Pasadena City College and earned an associate's degree in business during the early nineties. Tam had vast work experience...from clerical to radio to office management. Her beautiful daughter and only child, Anya Adger was born on an early Spring day in Oakland, California, after a long and arduous labor. Anya gave her three adorable grandchildren. Tam was a successful single mother and an outspoken, brave woman with lots of fight and determination. She married John Stoll in July 2003, and lost her beloved husband in February of 2015. Tam was crafty and artistic. She enjoyed decorating her home, clothes and gifts. 'Bedazzle' should have been that middle name! Tam wasn't just smart and clever. She had a beautiful singing voice, and enjoyed her time in the Lynwood Academy Lynaires, the Miramonte Chorale and doing solo work. Tam was preceded in death by her father, Leon S. Verrett II; her husband, John Stoll; her stepfather, Pastor David H. Hughes. She leaves to mourn: her daughter, Anya Travella Adger; her grandchildren, Covieair Andre Webster, Arhyus Jaymeir Jackson and Ry'elle Johniyah Jackson; her mother, Eunice (Dennison) Verrett Hughes; her siblings, Renee Verrett-Dooley (Wayne), Leon S. Verrett III (Vanessa), Andre M. Verrett, Franchesca M. Verrett, Ardra Williams (Wayne), Brian Verrett and Shannon J. Verrett; and a host of other loved ones and friends.