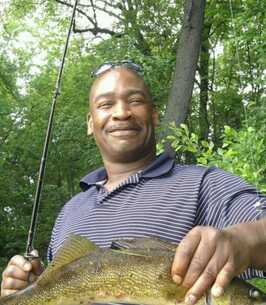 Troy Donahue Davis was born on January 4, 1962, to Gloria Dean Davis in Detroit, Michigan. He was raised by his mother and grandmother, Irene “Mother” Dudley until the age of 11 when he moved to Dousman, Wisconsin with Gloria, Ulysus, Gary, and Damian. In Dousman, Troy attended school in the Kettle Moraine School District. He was quite the athlete in school, lettering in football, basketball, weightlifting, and wrestling. Troy graduated from Kettle Moraine in 1980.

While Troy spent a lot of time practicing and competing athletically, he did most of his “training” on the farm. Being the oldest child on the farm, meant that Troy worked hard caring for animals, stacking hay, and working in the fields. He had the muscles to prove it!

Troy held many jobs as a laborer over the years. The strong work ethic he developed on the farm stayed with him into adulthood. He was a hard worker, a strong leader, and a joy to have as a coworker. No matter what he always had a smile on his face and a positive attitude.

Troy loved being a dad and a grandpa. His sons meant the world to him and he wanted nothing more than to see them succeed. They shared his love of sports, both playing and watching. He also enjoyed spending time with his young grandchildren, sharing both moments of rough-housing and tender hugs and kisses.
In addition to his family, Troy’s two other great loves were fishing and the Dallas Cowboys. He tried to get to a fish bank whenever he could. And, you can be certain that if the Cowboys were playing he was watching and cheering. Singing their praises even on the heels of a loss.

Troy was preceded in death by his mother, Gloria Meredith, and grandmother, Irene Dudley. Continuing to carry on his memory are his children: Andrew & Tyler (mo. Monica) and Collin (mo. Alison); father, Ulysus Jr.; siblings: Ulysus III, Gary, Damian, and Tiffany; grandchildren: Javon and Aalayah; and a host of aunts, uncles, cousins, nieces, and nephews.